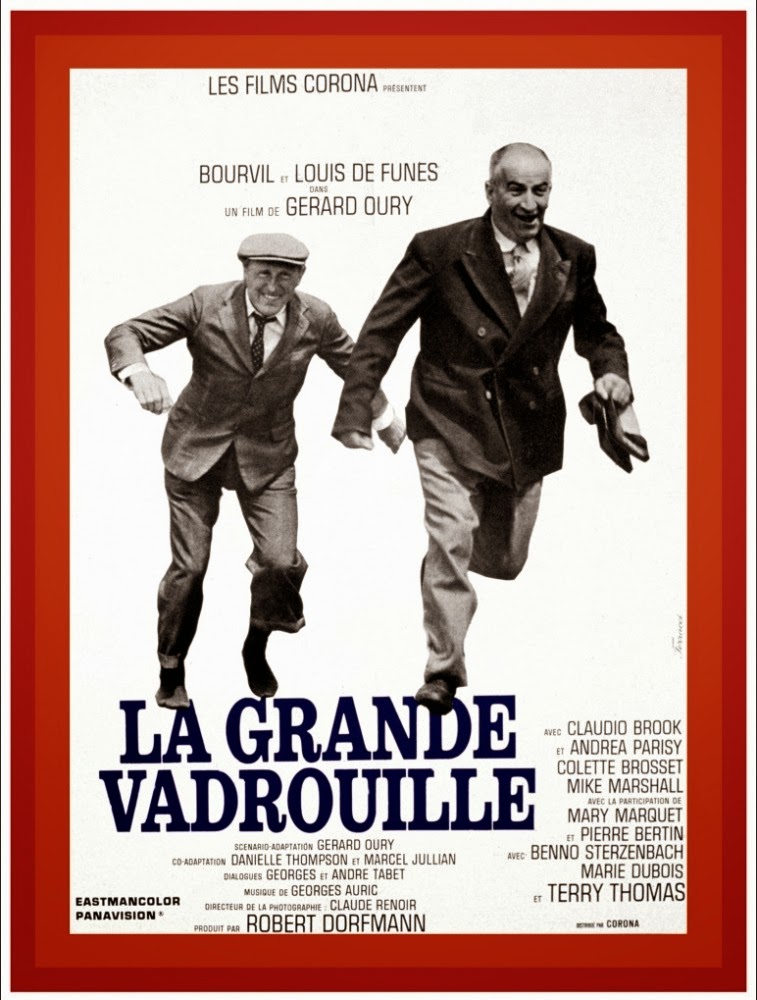 For over forty years it was the most successful French film in France. It remains the third most successful film ever in France, behind "Titanic" (1997) and "Bienvenue chez les Ch'tis" (2008). A major factor in the film’s success was the top billing of Bourvil and Louis de Funès, the two comedians had previously appeared two years earlier in "Le Corniaud". The two French comic geniuses were joined by the English comic actor Terry-Thomas, who plays one of the English airmen.
Synopsis
During World War II, when their combat aircraft is shot down by the Germans, three English airmen parachute to the comparative safety of Nazi occupied France. Peter Cunningham (Claudio Brook) lands on the scaffold of an amiable painter and decorator, Augustin (Bourvil). Alan MacIntosh (Mike Marshall) lands on top of a concert hall and is rescued by the patriotic conductor Stanislas Lefort (Louis de Funès). The third,  Sir Reginald (Terry-Thomas) ends up in the Paris zoo... 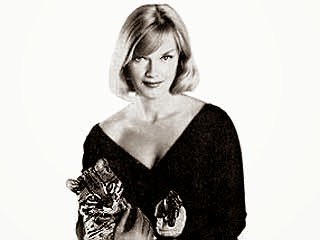 The character was created by Gloria and Forrest E. Fickling under the pseudonym "G.G. Fickling" in the late 1950s. West was intended as a combination of Marilyn Monroe and the fictional detective  Mike Hammer. Anne Francis first played West in an episode of Burke’s Law, entitled "Who Killed the Jackpot?" (1965), which led to a new series being commissioned as a spin-off.  Honey West was intended to be the American equivalent of the popular characters Emma Peel and Cathy Gale in the British series "The Avengers".
The first choice of producer Aaron Spelling for the role of Honey was Honor Blackman, then famous for her roles as Cathy Gale in "The Avengers" and as Pussy Galore in "Goldfinger". Blackman turned the role down and Anne Francis was cast in the leading role. The series was cancelled after one season due to the competition from "Gomer Pyle", "U.S.M.C.", and "The Avengers".
Main Cast 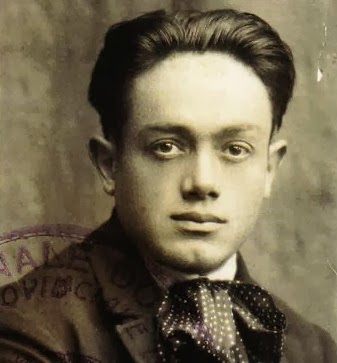 On 7 February 1964, just 61, Italian car designer Flaminio Bertoni died after an epileptic seizure. Bertoni was born in Varese, Italy, in 1903 and studied at the Francesco Daverio technical school where he graduated in 1918. After the death of his father, he found a job at a local body maker’s “Carrozzeria Macchi”, where his passion for car designs began.

In 1923 he was transferred to the planning department of Macchi Industries where a visiting team from France invited him to Paris. In 1929 he quitted Macchi and opened his own design and project workshop. In 1932 he was hired by Citroën and in 1934 he created the Traction Avant, he also begun to work on a new car, the TPV (later 2 CV) presented in 1948 at the Paris Salon de l'Automobile and which became a word phenomenon. At about the same time (1935) one of his previous designs for a "total view" bus with cabin above the engine was built by the Italian firm Baroffio.

In 1949 he obtained a degree in architecture. He patented in 1956 a new system for the construction of houses with this system more than 1000 houses were built in Saint Louis (USA) in only 100 days.

In 1955 he designed the successor to the Traction Avant, the DS 19, nicknamed "Déesse” (french for Goddess) by critics, the DS 19 was years ahead of its time. It was Bertoni's masterpiece, offering a radically new suspension and braking system and a plethora of man-made materials. His single-spoke steering wheel was one smooth, sensuous curve. His dashboard consisted of three curves with small dials and a tiny glove compartment.

In 1961 his last work as a designer, the Citroën Ami 6, was produced and the French Minister for Culture André Malraux, nominated him Master of the Order of Arts and Letters of the French Republic. It was the fair recognition to a man who had given so much to French culture.

On 23 June 1963 French car manufacturer Panhard (originally "Panhard et Levassor") introduced the all new 24 CT to the press in a large garden near Montlhéry. The Louis Bionier design was offered as two coupé versions: the Panhard 24 C and the Panhard 24 CT. The C had a basic interior and a 848 cc two-cylinder air-cooled boxer motor with an output of 37 kW, relatively few were sold and this version was dropped after one year. The CT was more luxuriously equipped and featured a 848 cc two-cylinder air-cooled boxer motor with 44 kW output. The CT would prove more popular: it continued in production until 1967.
In 1965 a longer wheelbase version became available as the berline: the Panhard 24 B and the Panhard 24 BT. The cars offered space for four or five people but still only with two doors. Equipment and engine options were the same as for the shorter C and CT versions. In 1966 a basic version, the Panhard 24 BA was offered. It had a very basic interior, even the glove compartment was replaced by an open shelf.

Panhard et Levassor was one of the first volume automobile producers in the world, back in 1890. In 1955 Citroën had taken a 25% holding in Panhard and by April 1965 it had full control of Panhard's automotive business. Short of production capacity Citroën faced a choice between developing the Panhard 24 or using the Panhard factory to produce Citroëns. Citroën choose the latter and the production of the Panhard 24 officially ended on 20 July 1967 with a total of 28,651 units.