The French-Italian film "Le casse" (English: "The Burglars") is released in France on 27 October 1971. Directed by Henri Verneuil and starring Jean-Paul Belmondo, Omar Sharif, Dyan Cannon and Robert Hossein, the film is based on the 1953 novel "The Burglar" by David Goodis. The music was composed by Ennio Morricone with two songs by Mireille Mathieu "Mon ami de toujours" and "Pas vu, pas pris". "Le casse" is a remake of the 1957 film "The Burglar" directed by Paul Wendkos starring Dan Duryea, Jayne Mansfield and Martha Vickers.

Left to right, front to back: 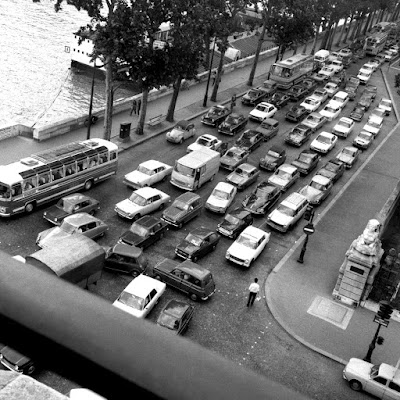 German car maker NSU ("Neckarsulm Strickmaschinen Union", founded in 1873, first car in 1905) originally intended to present their new NSU K70 in March 1969 at the Geneva Motor Show. At the last minute, the K70 was removed from the NSU show stand, probably by the new owner Volkswagen. Volkswagen acquired NSU Motorenwerke in 1969 and merged it with Auto Union (acquired in 1964), creating Audi NSU Auto Union AG, in 1985 renamed as Audi AG.

The development of the NSU K70 began in 1964. Designed by NSU engineer Ewald Praxl and styled by Claus Luthe as a four-door saloon (and three-door estate) it was intended to complement the NSU range between the NSU 1000/1200 and the NSU Ro80. The name of the car finds its origin in German, with K denoting the German word “Kolben” (piston) and 70 designating an engine output of 70 PS (51 kW). The Ro80 name meaning “Rotationskolben” typ 80. The K70 featured front wheel drive, strong road holding, a very roomy interior, and a large luggage compartment. The car also had, for that period, high standard safety features such as a fuel tank mounted directly ahead of the rear axle, and a steering column angled in order to reduce the risk of its being pushed too far back into the passenger cabin. 23 NSU K70's were produced.
The NSU K70 would ultimately become the first Volkswagen with a front-mounted engine, water cooling and front wheel drive in August 1970. It competed with Volkswagen brand cars like the Volkswagen 411 (1968) and the Audi 100 (C1) (1968). The estate version, which would have competed directly against the Volkswagen 411 estate, was never produced. The Volkswagen K70 was launched with a 1605 cc four-cylinder water-cooled engine, developed from the four-cylinder engine mounted in the rear of the NSU 1200. In 1973 the 1807 cc version (K70 LS) was introduced with 100 PS (74 kW).
The Volkswagen K70 was replaced in 1973 by the Volkswagen Passat, although production continued until February 1975 with a minor facelift in 1973. A total of 211,127 K70's were manufactured from 1970 until 1975.