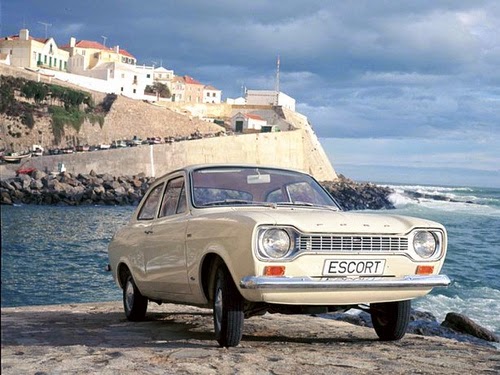 Ford of Britain introduced the Ford Escort at the Brussels Motor Show in January 1968. The Escort replaced the successful long running Ford Anglia. The Escort production commenced at Halewood (UK) at the end of 1967, and for left hand drive markets in September 1968 in Genk (Belgium).

The new small 2-door saloon rear-wheel drive Ford was available with a four-speed manual gearbox, or a 3-speed automatic transmission. The car was presented in two trim levels, “De Luxe” with circular front headlights and rubber flooring, and "Super" featuring rectangular headlamps, carpets, a cigar lighter and a water temperature gauge. Underneath the bonnet was the Kent Crossflow petrol engine in 1.1 L, and 1.3 L versions. A special version, the 1300GT, had a tuned 1.3 L Kent engine with a Weber carburetor and uprated suspension. The same tuned 1.3 L engine was also used in the Escort Sport.

At the end of March 1968 a 3-door estate was introduced. A panel van appeared in April 1968 and the 4-door saloon in 1969.
The Mark I Escorts became successful as a rally car, the greatest victory was in the 1970 London to Mexico World Cup Rally being driven by Finnish legend Hannu Mikkola. Afterwards Ford introduced the Escort Mexico with 1.6 L Kent engine. In addition to the Mexico, the RS1600 was developed with 1.6 L Cosworth Kent engine. The RS2000 Escort was introduced in July 1973 it had a 2-litre overhead cam Ford Pinto engine.

Nicole Berger the actress known for her role as Therese Saroyan in "Tirez sur le Pianiste" (Eng.: "Shoot The Piano Player"), died on April 13, 1967, in a car accident in Rouen. She had just completed the film, "La permission" (Eng.: "The Story of a Three-Day Pass") by Melvin Van Peebles. She was 32 years old.

Nicole Berger, whose real name is Nicole Gouspeyre , was born 12 June 1935 in Paris. She attended the acting courses of Tania Balachova and René Simon and attempted a singing career without any success. She made a very promising start in the theater with "Carambouille" a play by Jean Guitton. Afterwards she performed in the company of Jean-Louis Barrault on a tour in South America. At the start of her career Nicole Berger remained with the theater in "Romeo and Juliet" alongside Maurice Ronet and with Valentine Tessier in the Brussels play "La fiancée du Matin".
At the age of 16 Nicole Berger made her first film appearance in "Jocelyn" based on a novel by Lamartine. At that time she used the pseudonym Nicky. In 1953 she had in a small role as Martine Valendor in "Julietta" directed by Marc Allégret with Jeanne Moreau and Jean Marais. But in 1954, she gets a breakthrough with her role in "Le blé en herbe" directed by Claude Autant-Lara. In this film, based on a novel by Colette, she plays a frail and very touching teenager alongside Edwige Feuillère and Pierre-Michel Beck. In 1955 she continues with a role in "Le printemps, l'automne et l'amour" alongside Fernandel. Subsequently, in 1956, she starred in "Ein Mädchen aus Flandern", a film by German director Helmut Käutner.
In 1960, she was directed by François Truffaut in "Tirez sur le Pianiste" with Charles Aznavour. After this film Nicole Berger went on to do television work. In 1966 she played the main role in the television series "Cécilia, médecin de campagne". The same year she appeared in her final film "La permission" by the American director Melvin Van Peebles. The film was released after the death of Nicole Berger.
Posted by Purrr at 21:44 No comments:

On 19 October 1966 the American film "The Fortune Cookie" is released. The film film stars Walter Matthau, Jack Lemmon, and is directed by Billy Wilder from a script by Wilder and I.A.L. Diamond.

This film marked the first pairing of Jack Lemmon and Walter Matthau, who subsequently worked together on 10 films: "The Fortune Cookie" (1966), "The Odd Couple" (1968), "Kotch" (1971), "The Front Page" (1974), "Buddy Buddy" (1981), "Grumpy Old Men" (1993), "The Grass Harp" (1995), "Grumpier Old Men" (1995), "Out to Sea" (1997), and "The Odd Couple II" (1998).
Wilder had to postpone production for weeks after Walter Matthau had a heart attack. Matthau's drastic weight loss from scene to scene is noticeable, he had slimmed from 190 to 160 pounds by the time filming was completed, and had to wear a heavy black coat to conceal the weight loss.
Synopsis
CBS cameraman Harry Hinkle (Jack Lemmon) is knocked over during a football game by player Luther "Boom Boom" Jackson (Ron Rich). Hinkle's brother in law, Willie Gingrich (Walter Matthau) aka as "Whiplash Willie" the king of the ambulance chasing lawyers, starts a law suit...
Main Cast
Awards