The Lucy Show, an American situation comedy, aired for the first time on CBS in 1962. The show was Lucille Ball's follow-up to the immensely popular "I Love Lucy" (1951-1957).

In 1962, two years after Lucille Ball and Desi Arnaz divorced and their final show aired (using the "I Love Lucy" format), Desilu Studios was struggling. Desilu Productions, co-owned by husband and wife Desi Arnaz and Lucille Ball, was best known for its hit productions such as "I Love Lucy", "Star Trek" and, "The Untouchables". Arnaz, president of Desilu Studios, offered Ball an opportunity to return to television in a weekly sitcom. At that time, CBS executives were somewhat dubious as to whether Ball could not only carry a show without Arnaz, but also follow such a landmark series as I Love Lucy. CBS agreed to a full season of episodes and The Lucy Show premièred on Monday night, October 1, 1962.

Synopsis
After the death of her husband, Lucy Carmichael and her friend, the recently divorced Vivian Bagley, move into a house together with their children. The series follows the adventures of the widow Lucy and with her job working as the personal secretary to the impatient and grumpy banker Mr. Mooney...

The Jaguar E-Type was introduced, initially for export only, in March 1961. The domestic market (UK) launch came four months later in July 1961. The E-Type was designed as a rear-wheel drive grand tourer in two-seater coupé form (FHC or Fixed Head Coupé) and as convertible (OTS or Open Two Seater). The 2+2 version with a lengthened wheelbase was released several years later.

Elvis Presley stars in the 1960 western film “Flaming Star”. The film was directed by Don Siegel and the story was based on the book “Flaming Lance” (1958) by Clair Huffaker. Critics agreed that Presley gave one of his best acting performances as the mixed-blood "Pacer Burton".

Synopsis
Sam Burton's (John McIntire) second wife Neddy (Dolores del Rio) is Indian, their son Pacer (Elvis Presley) a half-breed. As struggle starts between the whites and the Kiowas, the Burton family is split between loyalties. Neddy and Sam are killed; Pacer sides with the Indians, his half-brother Clint (Steve Forrest) with the whites.

On March 27, 1977, two Boeing 747 passenger aircraft collided on the runway of Los Rodeos Airport (now Tenerife North Airport) on the Spanish Canary Island of Tenerife. With a total of 583 fatalities, the crash is the deadliest accident in aviation history.

The aircraft involved - KLM Flight 4805 (Type: Boeing 747-206B, Registration: PH-BUF, Name: Rijn (The Rhine)) and Pan Am Flight 1736 (Type: Boeing 747–121, Registration: N736PA, Name: Clipper Victor) - had been, along with many other aircraft, diverted to Tenerife from Gran Canaria Airport after a bomb exploded there. Many aircraft were diverted to the smaller Tenerife airport where air traffic controllers were forced to park many of the planes on the taxiway, thereby blocking it. Further complicating the situation, a dense fog developed at Tenerife reducing the visibility.

When Gran Canaria reopened, the parked aircraft blocking the taxiway at Tenerife required both of the subject 747s to taxi on the only runway in order to get in position for take-off. Due to the fog, neither aircraft could see the other, nor could the controller in the tower see the runway or the two 747s on it. As the airport did not have ground radar, the only means for the controller to identify the location of each plane was via voice reports over the radio. As a result of several misunderstandings in the ensuing communication, the KLM flight attempted to take off while the Pan Am flight was still on the runway. The resulting collision destroyed both aircraft, killing all 248 aboard the KLM flight and 335 of 396 aboard the Pan Am flight. Sixty-one people aboard the Pan Am flight, including the pilots and flight engineer, survived the disaster.

The 21th Eurovision Song Contest was held on 3 April 1976 at the “Congresgebouw” in The Hague, Netherlands. Corry Brokken presented the festival and of the 18 participants Brotherhood of Man won for the United Kingdom with "Save Your Kisses for Me".

It was the first time that a previous winner hosted the contest. Corry Brokken won the festival in 1957 with the song "Net als toen" ("Like it used to be"). Liechtenstein submitted a song but as they had no broadcasting service of their own they were not allowed to participate. Greece's entry aroused some controversy because the song was about the Turkish invasion of Cyprus therefore Turkey withdrew from the contest. Sweden withdrew from the contest, as the broadcaster Sveriges Radio (SR) did not have enough money to host another contest if Sweden won again.

The Citroën CX won the Car of the year award in 1975 with 229 points. Twenty years after the legendary ID/DS, Citroën introduced another design surprise. Great looks were again combined with aerodynamics, as was suggested by a name meaning in French penetration coefficient. The improved hydro-pneumatic suspension gave the car superb comfort and body control. Second was the Volkswagen Golf with 164 points and third the Audi 50 with 136 points.

The CX's flowing lines were designed by auto stylist Robert Opron, based upon its precursor the ID/DS, the sporty SM and the smaller GS. Mechanically, the car was one of the most modern of its time, combining Citroën's unique hydro-pneumatic integral self-levelling suspension, speed-adjustable power steering (first introduced on the Citroën SM), and a unique interior design that did away with steering column stalks, allowing the driver to reach all controls with his or her hands on the steering wheel. The CX suspension was later used under license by Rolls-Royce and Mercedes-Benz.

Available models were a four-door saloon, a break (Familiale), and a long-wheelbase model built on the break chassis (Prestige et Limousine). 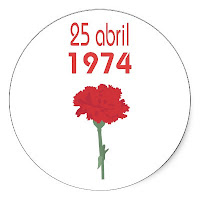 The 25 April coup became known as “The Carnation Revolution” (“Revolução dos Cravos”). It ended the longest dictatorship in Europe, the “Estado Novo”. In the early hours of 25 April 1974, “The Carnation Revolution” began in the Portuguese city of Lisbon. There were two secret signals in the military coup: first the airing (at 10:55 pm) by “Emissores Associados de Lisboa” of the song “E Depois do Adeus” ("And After Goodbye”) by Paulo de Carvalho, Portugal's entry in the 6 April 1974 Eurovision Song Contest, which alerted the rebel captains and soldiers to begin the coup. Next at 12:20 am, “Radio Renascença” broadcast “Grândola, Vila Morena” (“Grândola, swarthy town”), a song by Zeca Afonso, a influential folk and political musician-singer forbidden on Portuguese radio at the time. This was the signal that "announced" that the revolution had started and nothing would stop it except "the possibility of a regime's repression". 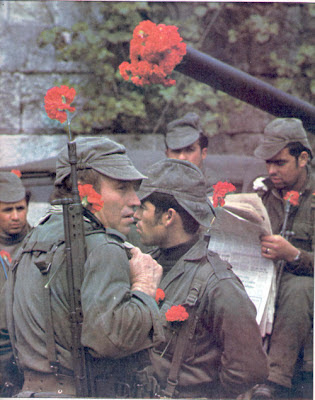 The military forces quickly overwhelmed the government, sparking spontaneous demonstrations in the street, in which civilians ran out to mingle with the soldiers, despite orders to stay inside. At the time, carnations were flooding the famous central flower market of Lisbon, and many citizens put them into the gun barrels of the soldiers, inspiring the name “Carnation Revolution” to describe this event in Portuguese history.

From 1973 to 1974 B 'n' B Pictures Corp. and Paramount Television produced "The Magician". It starred Bill Bixby as stage illusionist Anthony "Tony" Blake. A total of 22 episodes and one pilot were produced.

Blake was a professional stage magician who used his skills to solve crimes. Some years ago, Blake had been wrongly convicted of a crime, and unjustly confined in a prison in South America. He discovered a way to escape with his cell mate, which began his interest in escapology. The cell mate died and left him a fortune...

Based on a play by Leonard Gershe, “Butterflies Are Free” was produced by M.J. Frankovich and directed by Milton Katselas. It was released on 6 July, 1972 in the USA. While the original play was set in New York, the film was set in San Francisco.

All Don Baker (Edward Albert) wants is a place of his own away from his over-protective mother (Eileen Heckart). Don's been blind since birth, but that doesn't stop him from setting up in a San Francisco apartment and making the acquaintance of his off-the-wall, liberated, actress neighbour Jill Tanner (Goldie Hawn). Don learns the kind of things from Jill that his mother would never have taught him! And Jill learns from Don what growing up and being free is really all about... 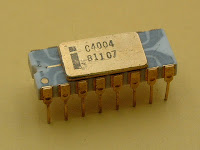 In 1971 Intel Corporation released the Intel 4004 central processing unit. It was a 4-bit CPU and the first complete CPU on one chip. The integration was made possible by the use of then-new silicon gate technology allowing a higher number of transistors and a faster speed than was possible before.

The 4004 was the first commercially available computer processor designed and manufactured by chip maker Intel, which had previously made semiconductor memory chips. The chief designers of the chip were Federico Faggin and Ted Hoff of Intel, and Masatoshi Shima of Busicom.

The 4004 had a maximum clock speed of 740 kHz. The first commercial product to use a 4004 microprocessor was the Busicom calculator 141-PF.

Email ThisBlogThis!Share to TwitterShare to FacebookShare to Pinterest
Labels: 1971, Intel, Science and Technology

1970, Music: The Beatles Officially Break Up 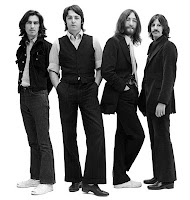 On 10 April 1970, Paul McCartney announced the end of The Beatles. The band officially split on 31 December 1970. Although tensions within the band had been going on for more than a year nothing of an official break up had been announced. Ringo and George had both left the group for a few days as far back as 1968. John was already doing a lot of solo work. In Johns opinion he felt they could have solo projects and come back every couple of years to record an album as the Beatles.

There was a lot of drama leading up to that fateful day. Without a manger, and their own Apple Corps. in shambles they needed some one to manage all their money. Paul wanted his father in law laws firm, The Eastman's and the other three Beatles were set on Allen Klein.
Ironically the man who seemed to most want to keep the Beatles together back in 1969 was the one who officially quit the band. On April 10th 1970, Paul McCartney released an official statement in advance copies of his 1st solo album "McCartney", and to various news outlets and media. The statement came in the form of a self interview claiming "a break with the Beatles due to personal, musical and business differences, but most of all because I have a better time with my family".

Email ThisBlogThis!Share to TwitterShare to FacebookShare to Pinterest
Labels: 1970, Music, The Beatles

1969, Television: Doctor in the House

From 1969 to 1970 London Weekend Television produced “Doctor in the House”, a British television comedy series loosely based on a set of books by Richard Gordon about the misadventures of a group of medical students. Two series with a total of 26 episodes were broadcast by ITV.

Most episodes were written by Bill Oddie, Graeme Garden, Barry Cryer and Graham Chapman. The series was directed by David Askey and Maurice Murphy. The producer was Humphrey Barclay.

Email ThisBlogThis!Share to TwitterShare to FacebookShare to Pinterest
Labels: 1969, Doctor in the House, Television