In July 1967 the last Panhard passenger car, a blue model 24BT, leaves the production line. It ended the existence of the world’s first commercial manufacturer of automobiles, selling 21 cars in 1891. The French company Panhard & Levassor, later Panhard, established the front-engine, rear-drive architecture used by most cars for many decades. It was also one of the first carmakers to adopt front wheel drive.
Panhard & Levassor was founded as a car manufacturing company by René Panhard and Émile Levassor in 1887. In 1891 Panhard & Levassor marketed the first production car using a licensed Daimler engine. In 1892 Panhard & Levassor built the world's first front engined car with clutch and transmission driving the rear wheels (Système Panhard).
After the death of Émile Levassor in 1897, Arthur Krebs becomes General Manager in 1897. He turned the Panhard & Levassor Company into one of the largest and most profitable car manufacturers before World War I. Between the two World Wars, Panhard & Levassor focused on the luxury market. Most cars used sleeve-valve engines licensed from Charles Yale Knight. The elegant Panoramique (Panhard CS RL-N) of 1934 featured three windshields (center and two at the sides for “panoramic” visibility) and numerous mechanical innovations. The last big Panhard & Levassor, before Wold War II, was the streamlined Dynamic designed by Louis Bionier.
After World War II the company was renamed Panhard and produced only light cars such as the Dyna X, Dyna Z, PL 17, 24 CT and 24 BT, all with air-cooled flat-twin engine. In 1965 Panhard was taken over by Citroën. In 1967 civil production ended. 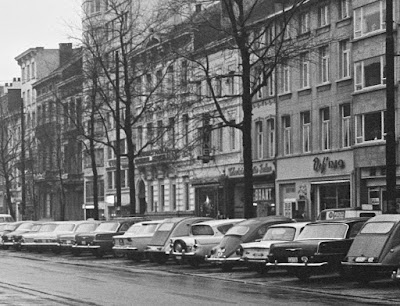 No 54: "De Koddige Kater"
The story was pre-published in the newspapers "De Standaard" and "Het Nieuwsblad" from 11 September 1964 until 22 January 1965. The main characters are Suske (Spike), Wiske (Suzy), aunt Sidonia, Lambik (Ambrose), Jerom (Jethro), mister Erdemelcher, Hans (servant), the Mayor and his wife Hildgarde, Siegfried (the tomcat) and Nonoletta (female cat). The main location for this story is Luxembourg. The album was reedited in 1967 as No 74 in the coloured series.
Synopsis
Lambik (Ambrose) accidently drives his car over a bike and he pays the bike owner for the damage. Seconds later he sees the man throwing his bike in front of another car. Aunt Sidonia's kitchen is not finished by a hired painter, she gets angry when she hears Lambik paid the painter in advance. Lambik leaves his good friends in anger, he's had enough to be taken by people. Willy and Wanda see how he gets into a black car...
Trivia
Cars
Posted by Purrr at 19:43 No comments: