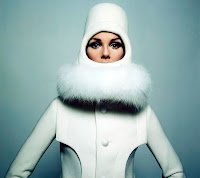 As space became popular in 1960's television programs like 'Star Trek', 'Barbarella' and '2001: A Space Odyssey' Pierre Cardin explored the idea of dressing for the future. Cardin's embrace of science and technology, together with the notion of progress was expressed in his Space Age Collection, which featured white knitted skin tight catsuits, ta-bards worn over leggings, tubular dresses, and his growing interest in man made fibres. Some of his fashions were made entirely of metal and plastic. His female models were dressed in shiny vinyl, skin-tight catsuits, high-legged leather boots and even space helmets. Collars, when used, were typically over sized and cut-outs were very revealing. He created his own fabric, Cardine, in 1968, a bonded, uncrackable fibre incorporating raised geometric patterns.

Pierre Cardin, born Pietro Cardin, is an Italian-born French fashion designer who was born on 7 July 1922, at San Biagio di Callalta near Treviso.